CALL US FIND US

BMW is one of the most popular luxury brands in the world. People who drive BMW vehicles enjoy the quality, comfort, and reliability of the brand. The various models of the car that have come out over the years are not named randomly. As with everything in German engineering, there is a system and method.

The company uses an alpha-numeric system for naming its car models. They combine letters and numbers that refer to the identity of each model. BMW has 8 different series and a range of sub-models in each of these. Each series is denoted by a number. The odd numbers denote 4-door sedans, while the even ones refer to 2-door vehicles.

There is a match between the series number and the expense of the series. The BMW series at present runs 1 through 8. The 1-series is the least costly; the 8-series models are the most advanced and thus are the most expensive.

Each BMW model consist of 3 numbers followed by letters. The first number constitutes the model series; the last 2 digits represent the engine weight in cubic centimeters; and the letters at the end of the series number give more information about the body and platform of the vehicle.

To be sure, BMW is not completely consistent with its naming conventions. Until 2009, for example, the model name for both X and Z series vehicles was the engine size in liters followed by an “i” for petrol engines or a “d” for diesel engines.

Example of a BMW naming convention: 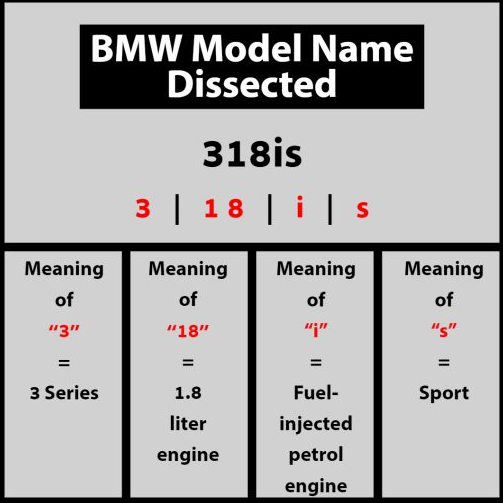 If you are a BMW enthusiast who is looking to purchase a vehicle—new or old—you can use the naming conventions to get information about the vehicle you want. See used BMW’s for sale at ALM Roswell here…